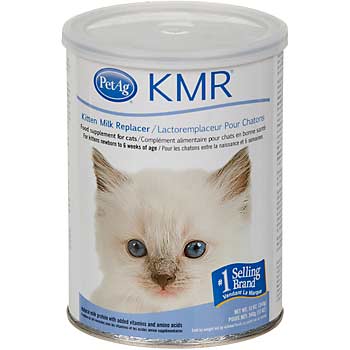 January 29, 2010, the FDA finished their investigation into Petag. Petag is the number one manufacturer of kitten and puppy milk in the world as per the company’s website. Their formulas — KMR and Esbilac — sickened and killed many animals in 2009. These formulas are also used for orphaned wildlife such as cheetahs, raccoons, squirrels and opossums who also died.

Only after the FDA began their investigation did Petag publicly admit on their website that their KMR kitten formula was bad and should not be used:

Recently, a limited number of KMR powder users have experienced product producing an off odor. Normally, the product exhibits a faint “milky” smell.

It has been determined that some packaged KMR powder may have been exposed to excessive heat outside the manufacturing process.

Do not use the product if it has an off odor.

Note: They provide no geographical location or product code information about this “limited” problem. They want consumers to call them and provide that info.

This was after months of reports of kittens and other animals who got diarrhea and died. Even though the company admitted on their website that they received multiple complaints, CEO and co-owner George Gill told the FDA that they only received one complaint. COO and company owner Darlene Frudakis admitted in a December 17, 2009 radio interview on “Where the fur flies” that their KMR formula was spoiled from heat and should not be used. Unfortunately Frudakis did not alert consumers or distributors of the problems with the product. She merely posted a small note on the company website. The tainted product is still on store shelves. The FDA does not have the power to force recalls on pet food items. The company must initiate their own recalls. Petag has not done this.

The formula does not expire until 5/2011. The company will replace any bad cans with a new one if you encounter this.

When informed about the spoiled formula from consumers, Pet Sense pet stores removed all of the product from their 31 stores nationwide. One manager of one Petco store removed the tainted product after consumer complaints. It is not known at this time if Petco or PetSmart removed all of the tainted formula from all of their stores nationwide. The tainted KMR smells rancid and appears more yellow than white. Do not use this formula.

Animal Advocates in Los Angeles, California was the organization which made the initial report to the FDA. More information about the problems is available on the Animal Advocates website.

New info about problems with KMR killing kittens and Petag admitting their KMR formula is bad and should not be used from Animal Advocates. This article and comments and this article from 2014.

Goat’s milk is a, or possibly THE, most nutritionally complete food. In fact, the American Journal of Medicine states that goat’s milk is “the most complete food known.” It does not stimulate the production of mucus (cow’s milk does) and can counteract inflammation. It also seems to have some antiviral properties that can benefit and enhance the immune system, and has a nutritional and compositional profile very similar to human mother’s milk. It is often well tolerated by infants, adult humans, and cats and dogs. One rescue group recommends that orphaned kittens should be fed goat’s milk when their own mother’s milk is unavailable.

Here are two recipes come from the Pro-Bone-O website.

Mix all together and serve.