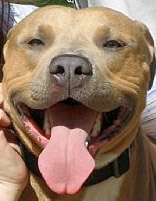 With all the bad press that still thrives regarding Pit Bulls around the world, it is refreshing when you see good press about them. So I happily pass this story along so you, too, can rejoice at the good news about D-Boy, a rescued Oklahoma City Pit Bull who defended his family from an armed intrusion and was shot three times in the process — two shots were to his head. Read the story» D-boy was rescued by Jason Chumley who says, “I took him away from people who were mean to him.” Three months later D-boy returned the favor, rushing to his family’s defense when a gun-wielding man forced his way into their Oklahoma City home.

When Roberta Trawick, 22, screamed, the 85-pound dog ran from a back room and lunged at the intruder. The armed man shot D-boy in the head. When the dog continued his charge, the man fired two more times, hitting the dog in the head and a leg. The man fled. No people were injured.

“It was pretty scary,” said Mr. Chumley, stepfather of Ms. Trawick. “D-boy was awake and aware but he was just lying there. It was awful. There was so much blood.”

D-boy, 2, was honored as one of five finalists in the 2009 Dogs of Valor Awards sponsored by the Humane Society of the United States and PetPlan Insurance. He also won the People’s Hero Award as the top vote-getter on the HSUS Web site.

D-boy amazingly survived and made a complete recovery with the help of people from all over the country.

Oklahoma City police officers who responded to the family’s 911 call rushed the dog to an emergency veterinary clinic.

“One of the officers said he’s never liked pit bulls, but he liked this one,” Mr. Chumley said.

There are many pit bulls in this country, and most of them are loyal, loving pets that never hurt anyone.

Mr. Chumley, by the way, owns a second pit bull named Nala. She “ran and hid in another room” when the armed man burst through the front door.

The first 24 hours were touch-and-go, vets said, but after five days of intensive care D-boy was ready to go home. The family didn’t know how they would pay the $1,700 bill.

D-boy hit the local news, the story went national and people from all over the country sent donations to cover the veterinary bill.

The home invasion happened last Dec. 5. The armed intruder has never been caught. Mr. Chumley says the family has no idea why they were targeted.

D-boy is as playful and friendly as he was before he shooting, Mr. Chumley said, although he’s a bit “edgy” when someone knocks loudly on the front door.

Go to www.humanesociety.org/dogsofvalor to read about all of the heroic dogs and to submit nominations for the 2010 Dogs of Valor.

An honor for Duncan
Duncan, the three-legged puppy featured in the May 9 Pet Tales column, was honored by Pittsburgh City Council this week.

Councilman Bruce A. Kraus issued a proclamation commending the Western Pennsylvania Humane Society “for all that they do for all of the animals in their care and for going that extra mile with Duncan and all dogs like him.”

Duncan, described in the proclamation as “a sweet docile pit bull terrier mix,” was there in council chambers for the ceremony. Karen Paschel of Bon Air was also recognized as “a dedicated volunteer” who is giving the pup a temporary foster home.

Duncan’s former owner surrendered him to the North Shore shelter at a very early age. Because he was limping, the staff X-rayed him and discovered there was a serious break on a growth plate and his right rear leg had to be amputated.

Now 11 months old, Duncan gets along well but he has learned to use a canine wheelchair so that he can take longer walks with his foster family.

Duncan is still looking for a permanent home. See him at www.wpahumane.com at the bottom of the home page.

In this week’s video at post-gazette.com, Doug Oster begins overhauling an overgrown perennial bed with help from a landscape architect. Next week, he continues the bed’s restoration with soil amendments and weed suppressors.