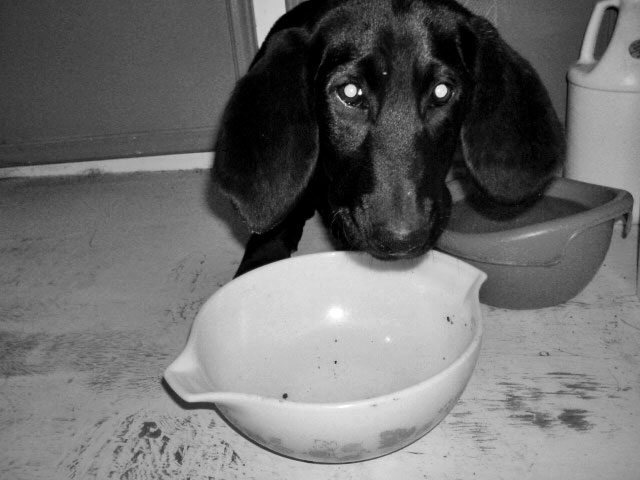 So read the signs on several telephone poles and wooden stakes in the immediate area.

Last Wednesday night, I let the dogs out for the last potty break before bed. It was late. About 1 am. Within a few minutes, several of them started barking like they had spotted something. Living in a rural area in the woods, my first thought, as usual, was that they have spotted an animal on “their” property — whether that be a deer, coon, possum, skunk, rabbit, horse, dog or cat. This is a partial list of what they have spotted in their yard in the past.

I went out in the pitch black, moonless night and could see nothing. Because of the barking, I could not listen to hear anything either. I finally quieted most everyone down and brought the ones in for the night that were coming. I have a few dogs that would not come into the house even if you left the door open all the time.

As we settled into bed, I heard Milo start barking again. Somehow I managed to keep everyone in the house from joining in. And in a few minutes, Milo quit. Next morning, halfway through my first cup of coffee, and with most everyone outside, the barking started again. ARGH! I put my shoes ON and went out to see just what was in the side yard that they were barking at. And there it was, rummaging in a small spot he had hollowed out for himself under a tree amongst the bushes the night before — a puppy.

At first, he turned away from me, but when I knelt down to his level, he came bolting out from under the tree and into my arms. “Great!” I thought. “Just what I need — a puppy!”

He’s black, looks like a lab/hound mix (he’s got those hound ears that dangle in the water bowl when he drinks), still has his baby teeth, and is not neutered. I would guess him to be about 3 months old. He has a fairly new green collar, but, as is so often the case, no tags. I really think the Sharpie pen company is missing the boat. They should attach their pens to dog collars so people might at the least put their phone number on the collar — even if they write it on the INSIDE of the collar. In assessing the situation, I concluded he was probably a Christmas gift. Because he arrived on a week day, I thought he might have gotten out of the yard while his family was at school/work. Not to worry. As soon as I put some signs up, his family will call and they will be re-united. Or better yet, maybe his family has already hung signs of their own.

I made signs. Pretty big ones. FOUND! PUPPY. CALL TO ID. And my phone number. I called area vet clinics to ask if anyone had inquired about him and to tell them what I found. No matches. I put him on PetFinder. Emailed my friends in the area. A friend asked me what I named him and I told her that he is not mine to name. That he has a family who has probably already named him. However, if I was to venture a guess at a name, I would have to say it’s “Hey” — as in “Hey, don’t do that!” or “Hey, come here!” or “Hey, let’s go outside!” But I think in the long run that will not be a very good name if for no other reason than because I use “hey” as a lesser version of “NO!” It’s a mini-“no”. It’s the word I use to stop an activity I don’t like before launching into the full-fledged, very firm “NO!”

Well, it’s been a week and there has only been one inquiry. A man looking for a brown dachshund. Ouch! A lost dachshund puppy in the rural woods? Scary thought. But equally as scary is that no one has hung signs or inquired from my signs. Could this be a Christmas present gone bad?

That he might be a “dumped” Christmas present is not the scary part. That’s just downright tragic and wrong. The scary part is that I am discovering how hard puppyhood can be. It’s been about six years since I last did puppyhood and apparently, a lot has changed in me. Or maybe it’s the circumstances. A puppy chasing after a bunch of grown dogs who are trying to get their heads around a strange dog who also happens to be a puppy (not that they can recognize puppyhood as a transitory phase) is A LOT of energy to try to navigate. Incredibly, just as I am about to “go around the bend” from the chaos, the puppy passes out cold for his nap.

In re-thinking the arrival of this bundle of energy, I remember seeing a Jeep-like vehicle pulled over on the side of the road in front of my side yard last Wednesday afternoon. I noticed them while I was cleaning up the yard. Odd place for someone to pull over as this is a short road with few houses on it. It circles back to another road through the neighborhood. Within a minute of me spotting them, they pulled slowly away. Seems that if they dropped this puppy off, they would have driven away faster. And it seems my dogs would have spotted him before it got dark. Also a little later after seeing the car pulled over, I spotted a dog in the woods across the street. I considered that the puppy may have come through the woods with him and got left behind.

No matter I guess because right now, I have a puppy in the house who is full of puppy energy and puppy teeth.