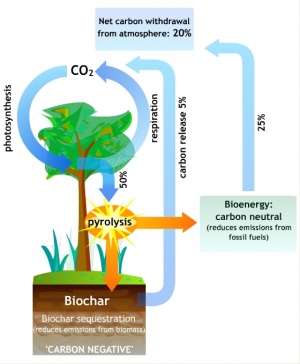 Invented by our ancestors, deposits of Biochar enhanced soil, called Terra Preta, have been found in vast areas of the Amazon basin, Ecuador and Peru, as well as in parts of West Africa, the South African savanna and late Roman Britain. The Terra Preta in the Amazon, where it is most prevalent, was created by humans 2500 years ago, and it is still regenerating. What is Biochar? Biochar is charcoal that is created by heating biomass (plants) under low oxygen conditions, which sequesters the plants’ carbon, rather than releasing it into the atmosphere. When Biochar is used to amend soil, the resulting Terra Preta sequesters more carbon, increasing its own volume. The activity of friendly microorganisms, called arbuscular mycorrhizal fungi, increases as well. The fungi spread beyond the original carbon, fix additional carbon, stabilize the soil and assist in nutrient uptake by plants. Biochar also improves soil fertility, reducing the need for synthetic fertilizers. It conserves water, prevents erosion and acts as a natural carbon filter for water by removing chemicals from runoff.

Biochar is inert and remains in the soil for thousands of years. It cannot be cut down, burned down, nor is it susceptible to erosion. It is self-renewing.

Biochar could be a solution for:

Too Good To Be True?

There is no question that Biochar is good for the soil. It sustained generations of our ancestors in places where soil was otherwise poor and infertile. During a recent field trial in Kenya, 45 farmers reaped twice the yield of corn in Biochar fields than they produced in fields treated with conventional fertilizers. TIME: Carbon: The BioChar Solution.

That, in itself, is promising. Slash and burn policies so prevalent and destructive in topical rainforests around the globe could be easily converted to sustainable practices that end deforestation and create rich pockets of fertile land. This land will not only produce abundant crops, but will create “sinks” that draw carbon from the atmosphere to clean the air and minimize methane and nitrous oxide emissions from the soil.

As if that weren’t enough, prototypes are in the works to harness the energy that creates the Biochar to power the tractor that tills the land.

No one proposes Biochar as the panacea for our climate challenges. Some even suggest that Biochar is too “lo-tech” or that it provides convenient cover for the “usual suspects” to dispose of their toxic waste. Even so, Biochar offers solutions to pervasive human struggles and merits serious consideration from global policy-makers as well as private citizens who choose to sequester their own carbon footprints.

Want to join the worldwide blogging efforts for replanting the rainforests?