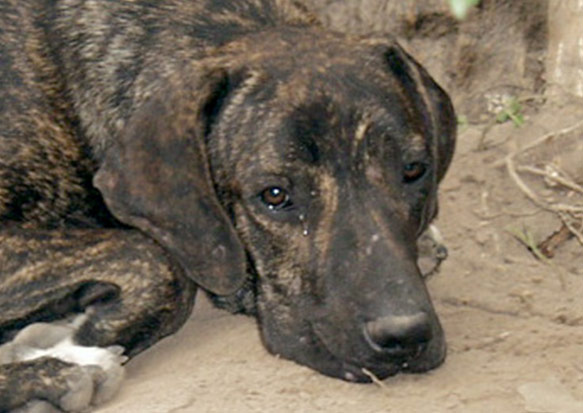 On September 15, Baxter was diagnosed with lymphoma. He is 3 1/2 years old… a baby with a very grown up disease. It’s been quite a ride to this point with all he has been through, but yesterday, he could not get himself up. It’s like his hind legs have become spaghetti. I tried to show him that I will carry him outside to go to the bathroom, or I will load him onto the little doggy cart and wheel him where he needs to go, or I will drag him across the room on a rug. But all these things are very strange and uncomfortable to him. Last night, it scared him and he dragged himself out the back door and into a doggy igloo where he spent the night. First night outside in a while. He finally dragged himself back out of the igloo this morning, but maybe because he peed on himself in the igloo. Or maybe the strain of dragging himself out of the igloo made him lose control.
His appetite is good. And he drinks water. But he has reached the end of all that he is and all that he will be.
I think this is the time I need to let go. I think I have to put him to sleep. Tomorrow will be no better than today but I cannot seem to make myself do this. This is one of those moments you wish someone would take over and drive the bus for you.
He whimpers sometimes. I’m sure he does not understand why he cannot stand or move as he wants. He starts to stumble as he struggles to get up, falls awkwardly and cries out in pain as his legs buckle awkwardly beneath him.