An act of defiance 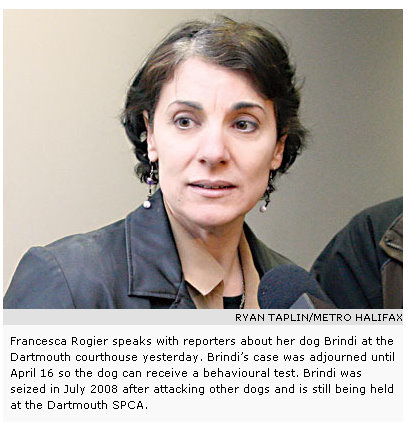 As most of you may know by now, Brindi’s fate is still on hold pending behavioral assessment. The court has been adjourned until April 16. Canadian Press has finally taken up the issue and Brindi’s case is now enjoying widespread coverage. Social Media has proved once again that a message is conveyed much more effectively through the voice of the community than traditional press releases.

We have received hundreds of e-mails requesting information as well as our point of view on this issue.

At this stage it is highly unlikely, I would go as far as saying impossible, that Brindi will be killed. Unless the City, in a desperate attempt to hold ground, continues to push for a killing order. At this stage nobody else believes Brindi should be killed. I am convinced there is not a single “expert in Canada” that would testify that Brindi presents a danger to the society.
So this is good news.
Vaughan Black, a professor at the Schulich School of Law at Dalhousie University, said the case is important because dog owners seldom actually contest the euthanasia of their dogs. “My sense is there’s not a lot of precedents on this simply because given the cost of this, and hiring lawyers, most people … don’t go to court the way Ms. Rogier is doing,” he said.
This is precisely what made Let’s Adopt! take up this case. What we have here is a woman fighting, against all odds, to save the life of her dog and have her returned home safely. We have someone fighting for what is right, against an unholy alliance of municipal officials and “animal welfare organizations” like the Canadian SPCA that like in so many other cases have betrayed their very own founding principles.
Brindi and Francesca have become symbols of a fight against oppression and discrimination that affects every single dog owner in Canada and the States. The vast majority of people would have yielded and allowed Brindi to be killed by lethal injection. Not Francesca. She stood on her ground and fought; her actions resulted in the changing of the law and the widespread questioning of a system that needs to be changed.
Francesca could have taken the easy way out and allow the City to kill her dog. She could have compromised and allowed Brindi to be given to someone else, there were no shortage of “dog trainers” willing to take Brindi in exchange for their 15 minutes of fame.
The fight for animal rights has surprising parallels with the Civil Rights cause. Same themes apply. Oppressive systems, individual rights trampled by the authorities, unlikely heroes who dare to stand up and say NO. It is in this precise act of defiance that people like Francesca Rogier draw their uncompromising strength and push to change the world for the better.

It all started with David and Goliath… and we know what happened with those two in the end.

587
Tags: against an unholy alliance of municipal officials and "animal welfare organizations" like the Canadian SPCA that like in so many other cases have betrayed their very own founding principles., Canadian Press has finally taken up the issue and Brindi's case is now enjoying widespread coverage, individual rights trampled by the authorities, Oppressive systems, The fight for animal rights has surprising parallels with the Civil Rights cause, unlikely heroes who dare to stand up and say NO, We have received hundreds of e-mails requesting information, We have someone fighting for what is right