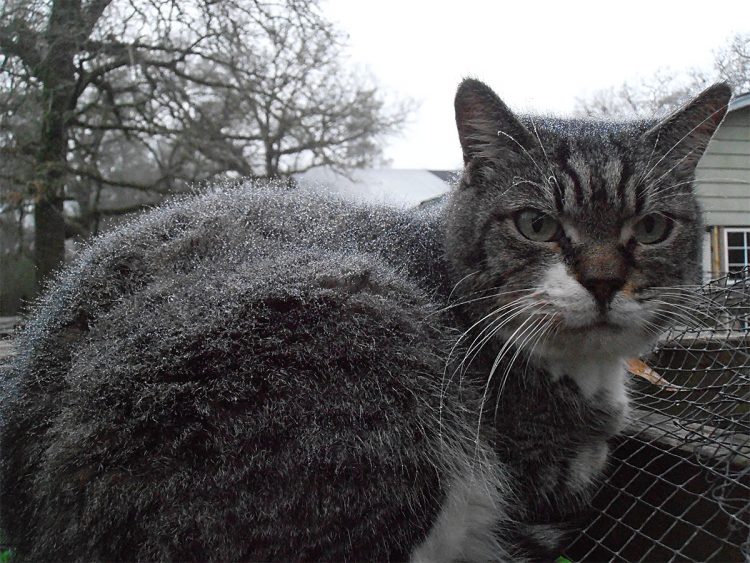 I just came across this photo of Sami yesterday. Also known as Grammy Sam (because she is a grandmother), she showed up outside the fence in the back yard sometime in the first half of 2016. Pregnant. She found a crook in a tree that had fallen during Hurricane Ike and spent time there everyday just looking into my yard.

She wanted nothing to do with me. But regardless, I took food to her everyday. I wanted to keep an eye on her and know when she had those babies.

She eventually had them in a neighbor’s shed right beside my side fence. Once they were old enough, I caught them and brought them into my house until I could arrange to get them all spayed and neutered. Then eventually released them into my back yard.

The babies were friendly and sociable, but Sami remained aloof and quite unimpressed by me.

I think this photo was taken shortly before she decided to move inside. Looking at this photo, you can see why she made that decision. I just don’t understand why she was outside in the rainy weather instead of on the enclosed porch.

One evening I opened the kitchen window where she was standing. There’s a shelf on the outside of the window. She came to the shelf many times and watched the going ons in the house. And many times I would offer her food. One evening, I opened the window as I was getting her some food. She walked in the window, jumped down onto the counter and made herself at home in a cardboard box nearby. Having looked through that window so many times, I think she had a good feel for life inside.

She is still inside and has never asked to go out. Over time when we have bad weather, I am glad she is inside.