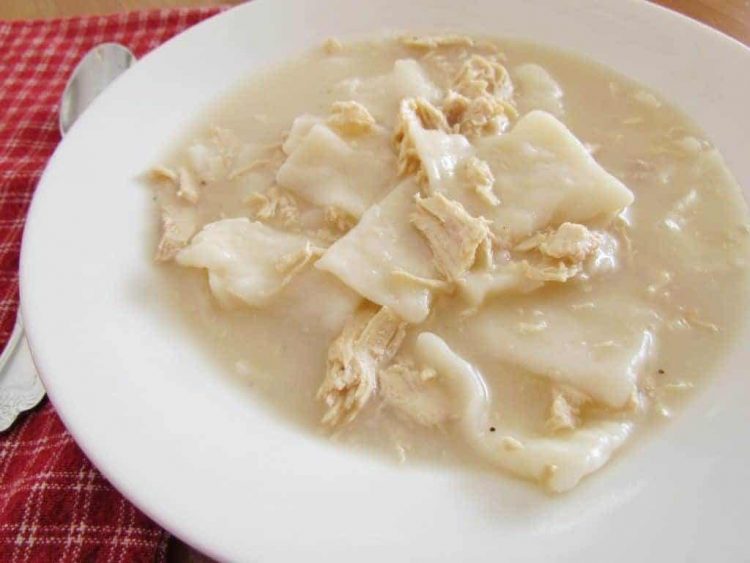 Here’s another recipe for slippery dumplings. One can never get enough dumplings. This recipe was submitted to us from Lynn C. Thank you, Lynn, for the recipe.

When chicken is tender, remove it from the cooking liquid. Use a slotted spoon to remove the giblets and most of the celery and onion (but not all). Carefully remove the chicken meat from the bones, and discard the skin and bones. Separate into dark and white meat on a platter, cover with foil and set aside.

Make and roll out the dumplings. Mix together the flour and salt in a large mixing bowl. Cut in the shortening. Add warm broth, a little at a time, until a soft (but not sticky) dough is formed. Divide into three balls in mixing bowl. Work with one ball at a time. Roll out the dough on a floured surface to a 1/16 inch thickness. Sprinkle with more salt/pepper. Use a knife to cut into ~2.5 inch squares. It’s quite okay if they are a little larger or smaller than 2.5 inches; and it’s okay if they are irregular shaped – no one will notice. Let dumplings dry out a bit (about an hour, or so) before cooking in broth. They can dry out either on the counter OR on the edge of the mixing bowl.

Heat broth on high heat to boiling. Drop one at a time into boiling broth. Be very careful not to let them stick together! Reduce heat to medium and cook dumplings uncovered until tender, about 15 minutes. Use a slotted spoon to put in a serving bowl. Serve immediately with the chicken.

TIPS for the slickest dumplings: Roll them out THIN. Cook in small batches! Also, if the broth becomes thick from the flour, add water in between batches.

……………….
You can see our other recipe here: Recipe: Slippery Dumplings