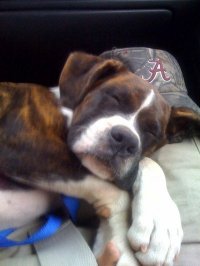 Dog Euthanized Within an Hour of Arrival at Jasper Shelter Euthanized within an hour of arrival at Jasper Shelter??? Folks, we have a problem at Walker County Humane Society in Alabama.

The following story has so many tragedies rolled into it that could have been avoided and the outcome would have been so much better. There were errors committed on all sides of the story… at least based on my opinion from the info in the articles I have read.

The bottom line? Boost was let down by everyone involved. All he did was get out like mischievous pups do on occasion. This should not have been a death sentence.

Any ONE of these things could have changed the outcome of this story:

Jasper, AL – Marcus Campbell was relieved to find out his lost boxer, named Boost, had been found Tuesday. The dog was at the Humane Society in Walker County, and Campbell was there to claim him the next morning before the doors even opened.

Campbell was too late. Boost was gone. Humane Society Executive Director Lane Reno says the dog came in at 4 and was put down by 4:30. At first, she thought the dog was a pit bull or pit bull mix, and says in those 30 minutes, her staff quickly evaluated Boost’s temperament. “We can have any individual bring a dog in. It’s a family pet. It’s never bitten anybody. It’s really nice, but I guarantee you if it tries to bite one of us while we’re reaching for it, we cannot and will not put that animal up for adoption.”

She says the 55 cages were already full, leaving no room for the moody boxer as the business day came to a close. The lack of space has become quite the issue as more and more strays are dropped off.

But Campbell maintains his dog was well behaved and was not a stray.

“It had a collar, and it was well fed. She should have known it was somebody’s dog.”

Campbell has hired an attorney because he believes there’s a chance the full bred Boost may have been sold. Reno denies that accusation. Meanwhile, the Humane Society’s board plans to meet with Walker County leaders to discuss getting some type of animal control for the unincoporated areas of Walker County.

If you live in this area of Walker Co. & have ever had this happen to you, please get in touch with the attorney that is handling Boost’s case.