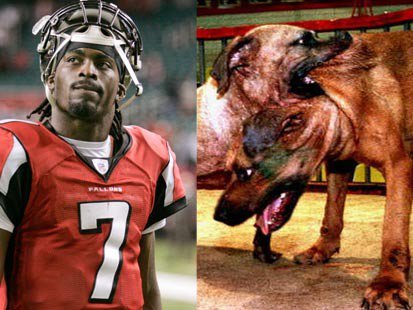 Please e-mail the sponsors of the Michael Vick Reality Show and express your opposition to their financial support of the program. As a result of their advertising, Vick is profiting from a lucrative reality television contract. This show is beyond the pale of depravity and must be canceled. Please also stop buying these companies’ products immediately and tell your friends and family to do the same. Of all the shows on television, these corporations made a decision to support Michael Vick.

HERE IS THE LETTER TO SEND:

To Whom It May Concern,

It has come to my attention that your company is considering to sponsor Mr. Michael Vick’s potential reality television show, and I am writing to request your decision to deny such promotion. Based on his indefensible actions torturing and killing dogs, Mr. Vick neither deserves favorable attention nor should be considered as a valued spokesperson. In fact, I have difficulty understanding how any respectful business would choose to sponsor an animal torturer and killer like Michael Vick. The fact that Mr. Vick’s victims were non-human animals neither negates their possession of sentience nor their capacity to experience emotion, including joy, pain, fear, and love. Mr. Vick’s activities were not only criminal, they were also extremely savage and demonstrated an absolute lack of compassion and integrity. You should be aware that any person who can deliberately subject animals to such reprehensible conditions and practices has the disturbing ability to inflict similar on humans, and criminal behaviour studies clearly illustrate the parallels between animal and human abuse…. See more

Indeed, had Mr. Vick tortured and killed humans, we would not be involved in such an exchange. Inequitably and immorally, non-human animals are considered as inferior to human animals, their treatments and lives only a reflection of how they benefit us; humans create false parameters distinguishing us from animals to justify how they are valued only as commodities. In fact, our estimation of animals begins and ends with their involvement in our egotistical goals, and societal approval is unconditionally granted to preclude conscious immorality, but we culturally embrace our “companion animals” in a demonstration of nullifying ethics: as long as we consider some animals as family, we can defend our actions against other animals. As such, a collective of people is willing to accept Mr. Vick’s actions and now champions him as a spokesperson and model citizen regardless of his previous behaviour. However, if people were so easily persuaded to forgive all unprincipled or unethical acts, we would not need a justice system, and those who deviate from accepted mores would encounter no repercussions of such.

I am therefore respectfully requesting that you sever all associations with Mr. Vick. To sponsor Mr. Vick in any capacity would indeed demonstrate your complicity in animal cruelty by accepting his actions as profitable; indeed, if not for his severely cruel and illegal dog-fighting business, he would never be considered for promotion via organizations or television. Furthermore, it is important to recognize that people are increasingly choosing companies that refuse to participate in and profit off the brutal enterprises exploiting animals, and I would personally boycott your business if efforts to support Mr. Vick are realized. Please consider the victims in this case who no longer have voices, and make the compassionate decision to refuse cruelty rather than sanction it.

Thank you for taking the time to consider this important message.

PLEASE DO NOT SEE THE FOLLOWING MOVIES WHO ADVERTISED DURING THE SHOW:
From Paris with Love
Shudder Island
The Crazies

Chevy
//www.chevrolet.com/pages/mds/helpcenter/contactUs.do
CHEVY HAS EXPRESSED THEIR FULL SUPPORT FOR MICHAEL VICK’S SHOW. PLEASE CONTINUE TO E-MAIL THEM UNTIL THEY GET THE MESSAGE.

Sprint
//www.sprint.com/contactus/
SPRINT HAS EXPRESSED THEIR FULL SUPPORT FOR MICHAEL VICK’S SHOW. PLEASE CONTINUE TO E-MAIL THEM UNTIL THEY GET THE MESSAGE.

Please also contact BET and tell them what you think of the show:
https://bet.wufoo.com/forms/contact-us-bet-programming/

2/4/10 Update: Nivea ended their commercial sponsorship of the show after being inundated with customer e-mails complaining about their support of the program.

2/5/10 Update: Pizza Hut issued a press release informing the public that they asked BET to end their commercial support of the show.

2/5/10 Update: Denny’s Restaurant contacted BET and ended their support after receiving e-mails from concerned customers expressing their opposition to the show.

2/6/10 Update: L’Oreal issued a press release that they have terminated their support of the Michael Vick “Reality” Show and apologized for offending L’Oreal customers.

2/8/10 Update: Nationwide Insurance issued a press release announcing that they asked BET to pull their ads from the Michael Vick Reality Show and that they do not support the program and do not wish to have any association with it.

(I will DVR the next episode and FF to the commercials to confirm these advertisers’ commitments and identify any new advertisers who may have filled their shoes.)

If Vick hadn’t killed dogs, he would never have this show. He’s making money off his killing spree. He recently said the reason for the show is to clear his family name. He also said that he will not speak about dog fighting anymore after the show. When Vick said he was going to dedicate his life to speaking out against dog fighting, apparently he meant he would do it twice per month for a year until people forgot about it and it was safe for him to be rich and famous again and profit from his crimes. He did a masterful job of using the HSUS to help him re-enter society. He was never sincere. He still thinks he’s a victim as evidenced by his arrogant and callous remarks after being nominated for the Ed Block Courage Award:

“I’ve overcome a lot, more than probably one single individual can handle or bear,” Vick said. “You ask certain people to walk through my shoes, they probably couldn’t do. Probably 95 percent of the people in this world because nobody had to endure what I’ve been through, situations I’ve been put in…”

Some people argue “everyone deserves a second chance…it’s time to move on” and “everyone makes mistakes”. Vick did not make a mistake; it was a conscious and calculated decision that he knew was wrong. He is diabolical, transparent, and evil. There is no cure for evil. He doesn’t deserve a second chance for his heinous and unspeakable crimes against animals. Those of us who speak for animals will not “move on” as Vick is emblematic of a larger problem in a society that shows disregard for the welfare of animals and believes lenient sentences and fines equate to justice. They do not.

If people want to idolize this sadistic killer, cheer for him from the stands and wear his jersey, they can do it. We draw the line with a reality show that allows him to profit from his felonies. Let us send a clear message — if you brutalize helpless animals, you will not be accepted back into society and return to fame and wealth without opposition. Our silence allows the opposite message to be sent. Complacency breeds acceptance. Acceptance leads to continued violence against animals. We do not have to accept things as they are and we will not.

Please help us send a message to the shameless sponsors of this show that we will boycott their products until they end their support of the program. You can click “Share” on this note and post it to your profile page to spread the word. Thank you.