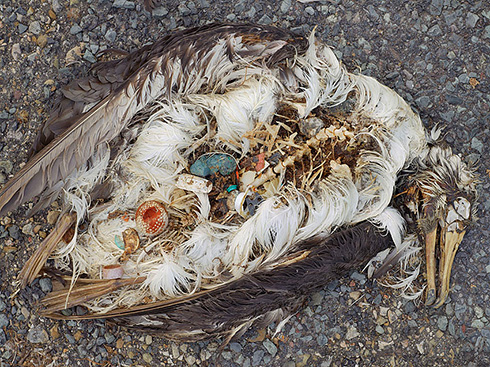 One Man’s Trash is Not an Animal’s Treasure I stumbled over this page on a website today and quickly went quiet with the sheer sadness of it. It shows the remains of birds that have picked through trash found in the ocean and died from the plastic they have ingested; the young died from plastic fed to them by their parents.


Midway
Message from the Gyre

These photographs of albatross chicks were made just a few weeks ago [2009] on Midway Atoll, a tiny stretch of sand and coral near the middle of the North Pacific. The nesting babies are fed bellies-full of plastic by their parents, who soar out over the vast polluted ocean collecting what looks to them like food to bring back to their young. On this diet of human trash, every year tens of thousands of albatross chicks die on Midway from starvation, toxicity, and choking.

To document this phenomenon as faithfully as possible, not a single piece of plastic in any of these photographs was moved, placed, manipulated, arranged, or altered in any way. These images depict the actual stomach contents of baby birds in one of the world’s most remote marine sanctuaries, more than 2000 miles from the nearest continent. In part, Wikipedia describes the Albatross as:

Albatrosses, of the biological family Diomedeidae, are large seabirds allied to the procellariids, storm-petrels and diving-petrels in the order Procellariiformes (the tubenoses). They range widely in the Southern Ocean and the North Pacific. They are absent from the North Atlantic, although fossil remains show they once occurred there too and occasional vagrants turn up.

Albatrosses are highly efficient in the air, using dynamic soaring and slope soaring to cover great distances with little exertion. They feed on squid, fish and krill by either scavenging, surface seizing or diving. Albatrosses are colonial, nesting for the most part on remote oceanic islands, often with several species nesting together. Pair bonds between males and females form over several years, with the use of ‘ritualised dances’, and will last for the life of the pair. A breeding season can take over a year from laying to fledging, with a single egg laid in each breeding attempt.

This website shows the results of a tiny camera attached to the backs of four Antarctic albatrosses revealing a clever feeding strategy: Instead of randomly scanning the open ocean for prey, some birds appear to fly alongside killer whales and scavenge for scraps left by the mammalian predators.

“Come with me on a journey,” filmmaker Chris Jordan says in the trailer below, “through the eye of beauty, across an ocean of grief, and beyond.”

“Midway: A Love Story for Our Time From the Heart of the Pacific” is an independent, feature-length film that reveals “the plight of the Laysan albatross plagued by the ingestion of our plastic trash. Both elegy and warning,” the movie’s site says, “the film explores the interconnectedness of species, with the albatross on Midway as a mirror of our humanity.”

The film was funded by donations and grants and is slated for release in late 2013. See more about it here, and watch the trailer and a segment on the plastic trash that contaminates the beaches of Midway Island, about 1,000 miles northwest of Honolulu, below.