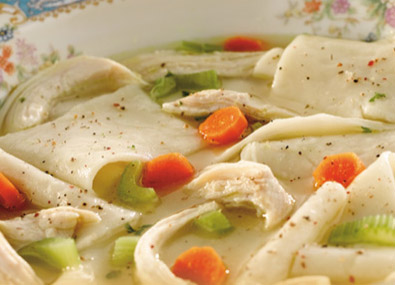 When I was much younger, our babysitter, Mrs. Bunting — or “Bumpy” as she became known because my little brother could not say Bunting — often cooked for us. Even though I was young, her food has stuck with me. It was different than the foods my mom — a Philly girl — prepared. One of my favorites to this day is Slippery Dumplings.

An article from the Washington Post explains Slippery Dumplings this way:

If there is one dish that typifies downstate [ Delaware ] cuisine, it is chicken with dumplings — a gut-filling combination of shredded white and dark meat suspended in thick, flour-enriched, chicken gravy. And not just any dumpling or dough mass will do. Downstate cooks prefer flat, slippery dumplings — not to be confused with the golf ball-size drop dumplings that are favored farther north.

So with that inspiration in mind, let’s get cookin’!

Season chicken with salt and pepper. Place chicken, celery and onion in a Dutch oven. Cover with water; bring to a boil. Reduce heat; cover and simmer until chicken is tender (about 20 minutes per pound). Remove chicken and keep warm. Add water to measure 4 quarts. Set aside 1/2 cup for dumplings. Return remaining broth to the Dutch oven; add Poultry Seasoning and bouillon.

In a large bowl combine the flour, baking powder and salt. Cut in the shortening with a pastry blender until the mixture forms fine crumbs. Stir in enough hot broth to make a firm but manageable dough. Meanwhile, bring broth to a boil. Roll dough on a floured surface to 1/16-inch thickness; cut into 2-inch squares. Drop one at a time into boiling broth. Reheat the broth to boiling over high heat. Reduce the heat to medium and cook dumplings uncovered until tender, about 15 minutes or until dumplings sink to the bottom of pot. Serve immediately with the chicken.

We have another slippery dumpling recipe here submitted by a reader and Sussex County resident.