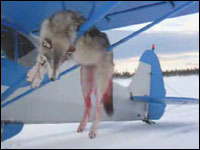 I received an email from the Defenders of Wildlife Action Fund regarding the aerial wolf slaughter in Alaska. It includes a video that the officials in Alaska would probably rather you not see where in the course of two weeks, they killed every wolf they could find in an area near the Yukon-Charley Rivers National Preserve. The slaughter ended when they could find no more wolves to shoot. I am sickened and saddened by this event and share it with you so you, too, might support the action to stop the aerial slaughter of wolves.

Alaska is the only state that allows private hunters to participate in the cruel and barbaric practice of aerial gunning of wolves. Alaskan wolves can be shot from airplanes — or chased to the point of exhaustion, then shot at close range. Across large areas of Alaska, no wolf is off limits — not even pregnant females. Plans are to target hundreds more in the coming years and open up new areas to aerial control.

In 1971, Congress passed the Federal Airborne Hunting Act — legislation specifically designed to outlaw exactly this type of unfair and unfounded killing. However, since 2003 officials in Alaska have flouted the intent of that law and perpetuated a scientifically unfounded aerial wolf-killing program.

So far, more than 1,000 wolves have been chased down by gunmen in low-flying aircraft and killed with high-powered rifles. More than 250 wolves were killed during the 2008/2009 aerial wolf killing season, making it one of the deadliest in years.

This brutal practice has been condemned by wildlife biologists, hunters and conservationists from Alaska and around the world… and with good cause.

Under the program, the state issues permits to private hunters to allow the use of planes to track and shoot down wolves from above or chase them to exhaustion and kill them at point-blank range. Allowing private citizens to participate creates an unethical hunting program and the state has weak information on which to base their decisions on how many wolves are killed under the program or any solid data to substantiate the program’s effectiveness.

The PAW Act would help restore science and integrity to wildlife management on America’s Last Frontier by:

Here's the video they don't want you to see! »

YOU CAN HELP
There are several ways you can help:

It was a brutal slaughter that claimed the lives of 84 wolves.

Alaska officials have tried to stop us from exposing the shocking photos of this slaughter, but we believe people must know the truth about the state’s out-of-control wolf-killing program, if it is to be stopped.

Donate now to help stop the aerial wolf slaughter, pass the PAW Act and save wolves and other wildlife.

WARNING: These graphics images are not suitable for children or adults who are sensitive to graphic images.