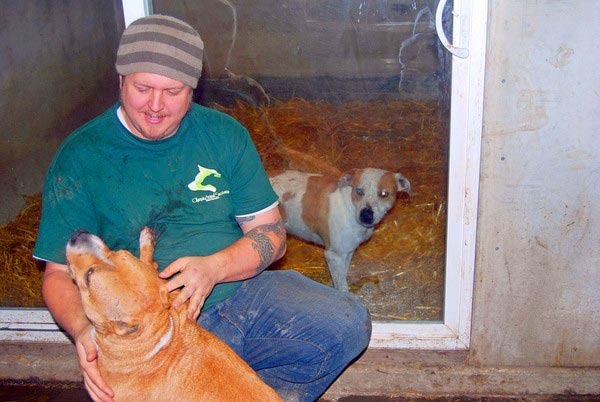 UPDATE: All did not turn out as initially planned. Perhaps it was a case where a good intention got out of control, but the overwhelmed sanctuary operator saw his sanctuary fall apart in just a few years.

Angry dog lovers in many parts of the northwest — and around the world online — became incensed over the conditions of more than 100 dogs inside Markwell’s dilapidated warehouse as photographed by police and volunteers who describe dogs fed once or twice a week, with sporadic access to clean water. Several died.

Markwell then surprised many by taking all 124 dogs, loading them over night just before Christmas into a 52-foot semi pulled by his red truck and taking them to the Arizona desert. Once there, he relinquished the dogs and let others, mainly a group called “Guardians of Rescue,” find homes for them across the country. Some of the dogs were sent to the warehouse because they’d been deemed dangerous.

Rescue work is hard work — mentally, physically and financially. I encourage you to support your local rescue groups so they can effectively and successfully do the important work they do for our communities.. Lend a hand, volunteer your services, donate some money.

Reporting from Forks, Wash. – There have always been good dogs and bad dogs. The good dogs come when you call, romp happily with the children and stay off the sofa. The bad dogs chase after cars, trample the flower beds and pass wind under the coffee table. Then there are the really bad dogs — the cat-killers, face-biters and snarling, drooling wretches so mean even their owners want them shot. Those are Steve Markwell’s kind of dogs.

“When people create these monsters, I think it’s people’s responsibility to take care of them. Not to just kill everything because it’s inconvenient,” said Markwell, who operates a sanctuary for canine ne’er-do-wells in the Olympic Peninsula rain forest.

“The fact that they have their quirks, the extra things you have to be cautious of, in some ways it’s almost endearing. It’s kind of like, the world hates you, but I don’t,” he said.

The Olympic Animal Sanctuary caters to the worst of the worst from around the country: dogs who would be euthanized or turned away at any other shelter, and those with records so bad that no animal welfare group would consider adopting them out.

Among the more than 50 animals currently at the sanctuary are domestic coyote mixes, guard dogs who once belonged to drug dealers, cat-killing huskies and one creature who appears to be 90% wolf and about as interested in being petted as a demon is in being in church on Sunday.

And their rap sheets are impressive.

One of Markwell’s first clients was a pregnant ex-fighting pit bull named Abby who terrorized the California town of Grapevine, in Kern County, for two weeks — despite having been shot — before Markwell was able to coax her into his truck.

After her puppies were born, they were so mean that they largely had to be isolated. “If I let him out right now,” Markwell said, pointing to one of the young toughs who was leaping and snarling behind a glass door, “he’d try to kill you. No doubt about it.”

Markwell has seen litters of puppies that started trying to kill each other at 7 weeks, and a miniature pinscher who bit off somebody’s lip and ate the family guinea pig.

Another of Markwell’s dogs now behaves just fine except for “the first two seconds” after he wakes up, when he’s almost always in a bad mood. “He was sleeping next to his dog walker, and he woke up and bit off half her face,” Markwell said. “But it’s easily manageable: Don’t sleep with him. If I’m sitting with him and he starts to go to sleep, I’m gonna wake him up and make him leave.” The sanctuary’s most famous inmate is Snaps, a mixed breed who made headlines south of Seattle in June when he attacked two women on the command of his owner, a 15-year-old girl.

A 63-year-old woman who had seen the girl and three other youths kicking the dog stopped her car. The girl grabbed the woman by the hair and began beating her with her cellphone. One of the girl’s companions moved in with Snaps, kicking the dog until he began attacking the woman. Another woman tried to intervene, and Snaps bit her so badly the skin was flayed off her arms.

The youths — ages 11, 12, 13 and 15 — were arrested, with the dog’s owner sentenced to 14 months in juvenile detention, and Snaps was facing a probable death sentence until Markwell stepped in.

“This vicious monster of a dog, he’s the sweetest thing in the world,” said Markwell, who often exchanges face kisses with Snaps, one of the few dogs allowed to roam uncaged inside the large industrial building, ringed with kennels, that is the heart of the sanctuary.

Markwell, 34, never intended to become one of the country’s chief go-to guys for unmanageable dogs. But he’s always had a thing for animals. When he was 4, he rescued a rabbit from his uncle’s fur farm. As a student at St. Margaret’s Episcopal School in San Juan Capistrano, he took in unwanted reptiles.

“I didn’t really understand animal welfare as a movement. It was a way to get free snakes,” he said. “I had a setup in the closet that my mom didn’t know about. She was terrified of snakes. And I had all these boa constrictors. And these big, carnivorous frogs that ate mice. And big lizards. It was something that I totally don’t condone now.”

He worked for a while after college on a horse ranch and gravitated toward wildlife rescue — moving to Washington state in 2003 with the idea of helping dogs who couldn’t be helped.

He started out by taking in two or three animals he simply ran into; others followed, and when his house got too small, he sold it and bought the industrial site that his brood already has outgrown.

Now Markwell gets calls from animal control agencies all over the U.S. that have dogs fit for neither pound nor play yard. He takes the dog only when he’s convinced it truly has nowhere else to go.

The sanctuary sits on a quiet side street in Forks, surrounded by woodworking mills and a few houses. Located in a zone with the highest rainfall totals in the Lower 48, the facility — with its high-fenced exercise yard — is four parts dog and three parts mud, generously intermingled; Markwell is usually encased in a pungent coating of dirt and dog spit.

At 6-foot-2 and 250 pounds, with an arm covered in tattoos, Markwell looks like he could intimidate even some pit bulls. But, he said, the secret of taming the untamable is not being tough. It’s giving dogs their space until they’re ready to let him in, exuding quiet kindness and corralling like-minded dogs together — that allows for socialization and management of bad behavior rather than trying to immediately eliminate it.

He scoffs at “dog whisperers” and rejects potential volunteers who say they have a “spiritual kinship” with animals.

“I have absolutely no place for people like that because they’re dangerous,” he said. “What it takes is common sense and experience. That whole ‘animals like me’ — well, animals like me too. But I take a really bad bite about once a month. Let’s not rely on that as our safety mechanism.”

Markwell spends most of his time in a kennel of his own, a 9-foot-by-7-foot space with a small computer desk, TV and DVD player. There, the most haunted dogs — semi-catatonic animals who have suffered terrible abuse and seem to want nothing more than to be left alone — live with Markwell for days at a time. Slowly they start to show some trust, coming up to sniff him when they think he’s sleeping.

“It doesn’t mean a dog I’ve had for two years and slept with in my bed isn’t one day going to take a chunk out of me. It sometimes happens,” he said. Markwell believes that the 4.7 million dog bites reported every year are a woeful underestimate. “I would say that there are probably more serious dog bites that take place in the United States every year than there are dogs,” he said.

“In effect, every dog bites somebody at least once in its life, which means it goes from being ‘a serious problem we have to address’ to just a fact of life.”

Abby, the terror from Grapevine, now adores being petted — but will head-butt you enthusiastically if you bend down too close. The miniature pinscher spends half the time being paraded around in Markwell’s arms.

But there will always be more really bad dogs, and Markwell is trying to raise $500,000 to move to bigger quarters. He gave a presentation to the Seattle Humane Society last month, but most of his donations come in small amounts from individuals over the sanctuary’s website, or from people responding to one of his Facebook ads: “We rescue scary dogs.”

Right now, a lack of outside space means dogs at the sanctuary must take turns romping in the exercise yard, usually in small groups. They spend most of their days in cages.

Markwell said he’s been lucky that most of his neighbors in the run-down lumber mill town, known as the locale for the “Twilight” vampire series, are dog-lovers. Few have raised objections to the sanctuary’s intimidating sounds. “In a town like this,” he said, “I’ve been able to . . . get my reputation established and do a lot of things I’d have a hard time doing in a place like Seattle.”

And when the dogs come here, they come to stay, Markwell said. Over time, he said, his four-legged friends mellow out, and he’s the one who gets scarier.

In fact, when some local meth addicts showed up asking for pit bulls, Markwell, who does a good growl, turned them away.

“I said, ‘Don’t come around here anymore,’ ” he said. “Tell your friends the dogs are dangerous, but the owner’s worse.”