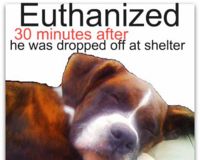 Seems that “big brother” in the form of surveillance video from the Walker County Humane Society in Jasper, Alabama has reared its head to show us what a gentle and willing dog Boost was in the last hour of his life. The video contradicts Director Lane Reno’s statements that Boost would not come out of his carrier and had to be pulled out using a carrier pole. Rather, it shows Boost walking into the shelter on a leash quite willingly.

It was reported Boost was euthanized because they had no room for him, but the video shows that the couple who brought him in left the carrier at the shelter. A shelter worker is seen bringing it in. Boost could have been temporarily kept in there.

Hopefully Director Reno will be removed from the position for such blatant miscommunication. How can any of the Director’s words be trusted after this?

Though I still believe Boost was let down in several ways, I feel Walker County Humane Society made some terrible mistakes that they made worse by trying to cover their butts. It’s incredibly hard to realize that these images are the last the family will have of their beloved companion, Boost.

Needless to say, there is a lawsuit pending against the Humane Society in this case.

from outside the front door, we see Boost coming out of the carrier —