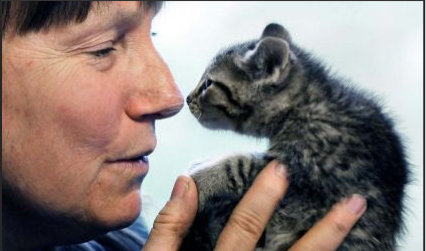 Everything is being affected by the economic downturn. Certain pre-existing situations are merely enhanced. However this enhancement is bringing us dangerously close to the tipping point: the point where we titter on a fine line between making it or failing. In this case, I am talking about the animal shelters throughout the country and likely even the world. The ones that are closing. Especially the smaller ones that depend on donations. Donations are dwindling, but the number of pets being turned in or abandoned is soaring.

We need new strategies for this new world.

We need to step up and be a part of the solution instead of sitting back and saying “what a shame” it is. We can do this. It is the sound of people hanging up after hearing the recorded message that Feline Rescue’s cat-saving programs are only for low-income families.

Now, the hang-up clicks are gone. Thanks to the recession, the callers have less money and qualify for help. Day after day, they leave a stream of messages about their unwanted cats.

“It is never-ending,” said volunteer Lachelt, “and it is heartbreaking.”

Cats — and the groups that rescue them — are victims of the economic downturn. Animal rescue groups are staggering under the burden of thousands of cats, turned in by people who have lost jobs or houses.

At the same time, donations to the cat-saving groups are dropping. Several groups are pulling back or failing — making more work for those that remain. This, in turn, increases stress on those who love cats. After 31 years of caring for dogs and cats, Rita Knudson recently shuttered the Brooklyn Park-based Lucky Dog Rescue. “We just couldn’t take it anymore,” she said.

“I do not want to drop dead with a leash in my hand. It’s stressful when the phone is ringing seven days a week, night and day.”

For shelter workers, the cat glut isn’t just about money.

It rattles their faith in humanity. It makes them bitter to think that kindness to animals only prevails when the stock market is up.

“There is so much more neglect now. So much more cruelty. I don’t understand it,” said Laura Johnson, president of the cat-rescue group SCRAM, based in Shoreview.
“I get these calls. I say, ‘We only have so many hands. Can’t you put this animal in your garage? Is there any way you can help?’ ” Johnson said. “Nine out of 10 say no.

“The suffering I have seen in the last nine months … I have nightmares.”

ABANDONMENT BURNOUT
Johnson saw a Siamese cat that had been set ablaze with lighter fluid. She has seen several cats turned loose after having been declawed on all paws, which renders a cat unable to feed itself.

“A cat like that doesn’t have a chance in hell,” Johnson said.

“People get mad because (cats) are killing songbirds. That is sad but true. Nature is cruel. But how are these cats supposed to survive?”

One reason Knudson quit was burnout over the increase in abandonment and cruelty.

She was called after kids in Minneapolis shot guns near a chained-up dog — as a training exercise.

“They said they were making it a police dog,” Knudson said. “It was the stupidest thing I have ever seen.”

Other times, stress comes from listening to owners abandoning pets they love. “A young gal called me to see if any assistance was out here,” said Erin Hauer, director of Our Paws Cat Sanctuary in Wyoming. “She said her cat was hungry. She said she was hungry.”

This June is a perfect storm for unwanted cats, said Deb Balzer, spokeswoman for the Animal Humane Society in Golden Valley.

Winters are steadily becoming milder, so the cat-breeding seasons are longer. “They used to have one or two litters a year. Now they have multiple litters,” Balzer said.

The recession compounds the problem. The river of unwanted cats is swamping the Humane Society.

“We average 75 cats a day, more than 500 cats a week,” Balzer said. Last summer, the Humane Society took in 10,000 cats. About half were adopted. The other half — old, diseased or unadoptable — were euthanized.

The national average of cats euthanized after being admitted to shelters is 71 percent, according to the Humane Society.

FEWER CATS OR MORE HOMES
SCRAM’s Johnson said calls for help have doubled in nine months. “We are averaging 30 to 40 calls a day, because of this economy,” she said.

The economic downturn hurts other animals, too.

Because of a foreclosure, the Humane Society recently received an entire petting zoo. Later, a goat named Billy was taken from a foreclosed farm in Woodbury.

But cats are by far the most common abandoned animals. The ultimate solution to an abundance of cats, rescue groups agree, is an aggressive and cheap spay-neuter program. Many such programs already are in force. For some cat owners, SCRAM charges a rock-bottom $33 for neutering and $69 for spaying — procedures that normally can cost $300.

The Humane Society’s Balzer said people need to learn that they have a responsibility to spay and neuter their cats.

“We hear people say, ‘Oh, I never got around to spaying and neutering them.’ Then it’s ‘Oh, look at all the cats running around here,’ ” she fumed. “Pretty soon they are giving away free kittens at their kid’s lemonade stand.”

“People need to open their homes,” Johnson said, “and take in another cat.”

Animal welfare groups need money and volunteers to help with the rise in abandoned cats.