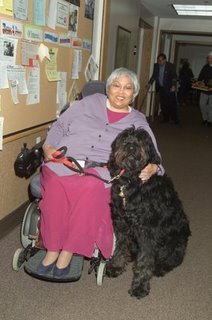 He had an obscure past. He was a wanderer of the streets in Chicopee, Massachusetts. He was a survivor. He was rough-coated and sported that perfectly imperfect tousled coiffure on his head and body.

That someone turned out to be me. In December 2000, I had applied for an assistance dog partner at NEADS because I had balance issues due to a neurological situation as a result of a viral infection.

Seven weeks after my interview, I got the anticipated call that I was matched to one of the largest dogs at the school and his name was “Sasquatch”, an Otterhound, which is a rare breed originating from Great Britain in the early 1100s. This gentle giant sported an impressive 115 pounds during his most productive years with me.

In fact, Dave Hessel, one of the NEADS trainers reminisced, “I can still remember that day when we were looking for dogs at the shelter in Chicopee and we came across this GIANT Otterhound without a collar, and if I remember correctly, there was a sign on his run door that said something to the effect of “Hard to handle” or “Do not handle”.

He was so huge that we thought it would be hysterical to bring him back to NEADS. So we prepared a leash loop and let him out and wrestled the loop onto him. We laughed the entire way out of there because he was such a giant clown! During our trip back from Chicopee, we tossed around name ideas for him, and then I threw “Bigfoot” out there, and then the American-Indian equivalent for “Bigfoot” which is “Sasquatch”. We laughed so hard that we were crying, and then we missed our exit off the Pike! So, it took forever to get back to the NEADS campus.”

Creature Comforts had featured this black, gentle giant with big brown eyes back in November 2004, and Bob LaPree documented Sasquatch’s abilities in performing housework — helping with the laundry by carrying the laundry bag from the bathroom to the kitchen then loading the washer and unloading the dryer, taking the trash out to the dumpster, to name a few.

This Fuzzy Guy knew the difference between bottled water and canned soda which he would fetch by opening the door of the refrigerator and not be tempted to snack on cold cuts while his head was in there. He often would be seen at Shaw’s in Goffstown, helping me get items off the shelves as I did my weekly shopping.

He would retrieve my prescriptions from the pharmacist on duty. He would fetch the cordless phone when it rang and picked up loose change from the floor and gently put it in the palm of my hand without dripping saliva on me.

Our bond was sealed early on in this partnership; he would know when my body would be medically compromised before I would be aware of trouble. He would stand in front of me, placing his paws on my shoulders and stare eye-to-eye to warn me of an oncoming migraine or asthma flare. He would pull me toward the bedroom at 2pm everyday so that I could take a nap. He would make sure that I had my facemask on with the oxygen and C-Pap machine operating before I fell asleep. Only then would he would join me on the bed, lying beside me while holding my right hand with his paw. If the oxygen tubing would get dislodged, he would “seek” for the end of the tubing and wake me up to reattach it to the mask. Every morning he would wake me up by 6am so that I could start taking my medication and he helped me get out of bed by steadying my balance. He would fetch my clothes and assist me in dressing.

Sasquatch was truly a smart hound. While he was training to be a walker-balance assistance dog at NEADS, he would be out in the play-yard with his fellow kennel-mates, sitting by the sidelines watching the other dogs running around the yard but he also would be observing the trainers who were supervising the playtime; he was studying how the trainers would access this enclosed area. They had to unlatch 2 gates in order to come in and go out of the play-yard. Well, one day he decided to open these gates which led to the parking lot and subsequent freedom of the 12 acre campus. My Fuzzy instigator let the rest of his kennelmates loose and the dogs scattered like the wind!

And where was Sasquatch? He was sniffing around the parking lot and then waited by the entrance of the school’s reception area so that he could go inside the building to hang out with the humans. Meanwhile, all the trainers and other staff members were running after the dogs to corral them back to the kennel. It was after this incident that the trainers nicknamed him “Houdini”.

Sasquatch had an imposing stature especially when I let his hair grow out for the winter season. He preferred the “natural look” which meant, he would vigorously shake his entire body after time was painstakingly spent brushing and grooming him; he looked like he got zapped by static electricity. He didn’t care as long as he could scamper away from the comb and brush and he would seek refuge just out of my reach.

Sasquatch was very intelligent; it took him less than an hour to learn the task of opening the fridge and targeting bottled water or a soda can, then shutting the fridge door. Being food-motivated made this task easy to teach him. But then he turned the tables on me when he would arbitrarily bring me bottled water repeatedly until I gave him a slice of cheese! “He” trained “me” well!

At noontime every day, Sasquatch would get a snack of vegetables, from wilted spinach to steamed green beans, beets, carrots, cauliflower, or broccoli. He would sit in front of his diner where his empty bowl was positioned, and quietly wait for his snack. When he got impatient, I would hear him howling with his vocal “basso profundo”. If I did not appear in the kitchen quick enough, he would grab the empty bowl with his mouth and trot to the living room where I would be working at my computer, and would slam the bowl to the floor! Another howl would follow to get my undivided attention. I swear he truly mastered the art of communication!

As a true hound dog, Sasquatch had that inner drive to hunt. Even though he was trained not to chase four-legged creatures of the meowing kind, he enjoyed taunting the feral cats of the neighborhood when he was off duty and catching some rays out in the front stoop. He was securely tied and never within reach of these kitty cats. During the winter months, I would heighten his propensity to hunt by taking his Kong, filling it with a cookie or peanut butter, and lay a trail around the house so he would follow the scent, digging under his bed, sniffing out the laundry hamper, only to find the object of desire balanced high above the top of the bathroom door or on the top bookshelf in the living room. He would bark at the toy, thinking it would drop down on its’ own accord.

One could see him problem solving his dilemma and he would have a “Eureka” moment figuring that if he slammed the door shut, the toy would fall to the floor and he would triumphantly take possession of the big prize. If the toy was on the top shelf of the bookcase, he figured that he could reach the toy by climbing onto a nearby chair.

Sasquatch gave me the courage to embrace life and he taught me to live for the moment. I have a hard time with that because the moment he left our earth to join the other angels at Rainbow Bridge, my grief bore a void in my heart and I am reminded of feeling his warm body against me as I held him in my lap and caressed his muzzle, cradling his head.

It was a peaceful moment for us both though I knew that we would be separated by the dimensions of life and the after-life. I won’t say goodbye for now because you are always with me as I hold you close to my heart. We shared a phenomenal partnership for exactly 8 years since you came into my life April 1st of 2001. You were the clown of my life; so appropo for April Fool’s Day. Enjoy being whole again, my dear Fuzzy Momo! Fly high with your angel wings; try not to bang into the other angel doggies at Rainbow Bridge. My love for you is steadfast. Feel free to visit me in my dreams!