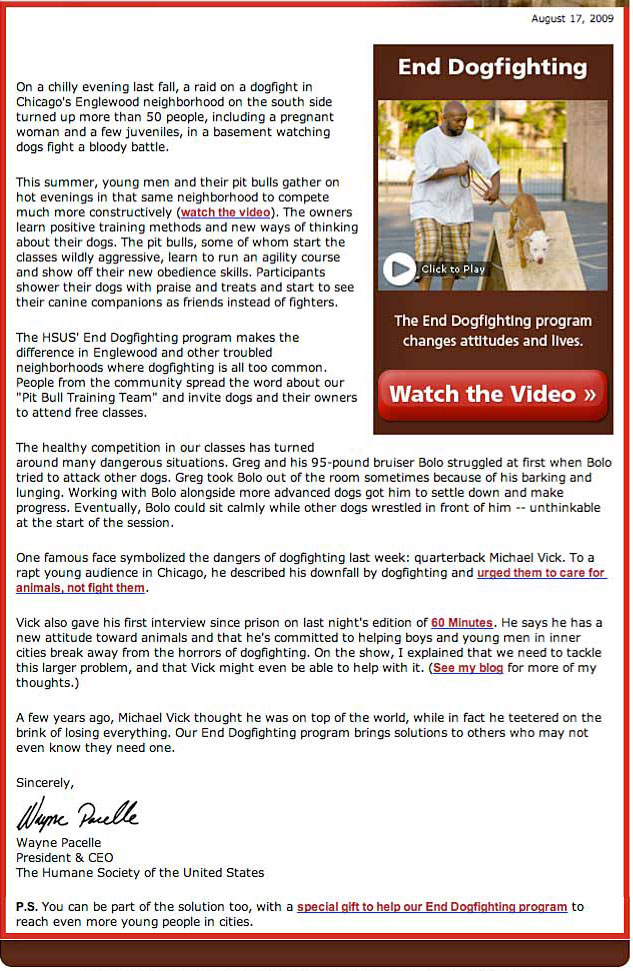 Adopt Pittee» I just cannot get my head around the idea of simply forgiving Michael Vick and re-instating him into his previous football career at a ridiculous salary as though his felony conviction for his barbaric acts of animal cruelty was just a blip on the radar. I watched his 60 Minutes interview with an open mind to see if I was being too harsh, too unfair. However, I walked away from the show thinking his re-instatement was just another sellout brought about by good PR. I did not see remorse, but rather someone coached in what he needed to say to return to football and his salary of millions of dollars. I believe his only remorse was in getting caught. And I have pulled my support for the Humane Society of the US.

As a member of HSUS, I was appalled to receive an email from them after the 60 Minutes interview asking me to donate money for the rehabilitation of Michael Vick’s dogs. I suggested they ask Mr. Vick for my portion. After all, his salary has more wiggle room. [Correction: I misrepresented the request from HSUS. After receiving a request from a reader, I re-read the email from the HSUS. They are requesting donations for the rehabilitation of dogs in communities where dog fighting is too common via their End Dogfighting program.

In part, their email reads: “One famous face symbolized the dangers of dogfighting last week: quarterback Michael Vick. To a rapt young audience in Chicago, he described his downfall by dogfighting and urged them to care for animals, not fight them.”

“Vick also gave his first interview since prison on last night’s edition of 60 Minutes. He says he has a new attitude toward animals and that he’s committed to helping boys and young men in inner cities break away from the horrors of dogfighting. On the show, I explained that we need to tackle this larger problem, and that Vick might even be able to help with it.”

Thank you to the reader for pointing this out so I can make this correction.]

The ASPCA recently released this statement explaining their involvement in the Vick case and their current stance. It cuts through the PR and gets to the heart of this story.

New York (Vocus/PRWEB ) August 22, 2009 — Ed Sayres, President and CEO of The ASPCA® (The American Society for the Prevention of Cruelty to Animals®) issued the following statement regarding Michael Vick’s interview with “60 Minutes”:

After careful consideration, we have decided to speak out now about Michael Vick because of the special circumstances involving the ASPCA. Several months ago, Mr. Vick’s PR representatives approached the ASPCA to help educate America about the heinous act of dog fighting following his release from prison. We were the first animal welfare organization given the opportunity to work with Mr. Vick but immediately turned him down due to the unique knowledge we had of his indescribable and barbaric acts of animal cruelty where he and his associates savagely electrocuted and beat dogs to death after they lost their brutal fights.

The ASPCA’s general consultation and our specific role in processing the forensic evidence in this case were key elements that resulted in Mr. Vick and the three other defendants all pleading guilty to felony crimes. As such, this organization and I personally have seen the acts of cruelty committed by Mr. Vick first hand – acts so heinous that the public has never laid witness to them. And now that Mr. Vick has spoken out for the first time since his release from prison, the ASPCA wants to make clear why this organization chose not to partner with him in his supposed rehabilitation efforts. We are simply not convinced that Mr. Vick has demonstrated compassion toward animals as living beings or the necessary remorse for his criminal actions against them.

“60 Minutes” provided a convicted criminal a national platform to selfishly focus on his own recovery when, in fact, the animals, the victims who cannot speak for themselves, should have received the attention. CBS did a grave disservice to the animal welfare community by failing to show the ugly truth of Mr. Vick’s actions and the horrors of dog fighting and animal cruelty in this country. The continued attention paid to Mr. Vick is only reinforcing that criminal behavior does not destroy fame and fortune.

The ASPCA works every day to prevent animal cruelty, in the absence of tougher, more consistent laws and lack of education and awareness. We serve as the animals’ voice, as millions of animals suffer alone and in silence because they cannot speak out against their perpetrators. When a crime against animals is committed, the ASPCA’s priorities are to build a sound case that results in successful prosecution of the perpetrators, as well as the rehabilitation of the victims. Our direct involvement in the Vick case yielded success in both areas, and in fact, we work every day to ensure perpetrators like him are behind bars.

Although Mr. Vick has served his time and is now entitled to employment, the ASPCA was strongly against him being able to immediately re-join the NFL, to play alongside highly paid elite athletes who are looked upon as our heroes and role models. Today, it is difficult to see him in the uniform of a Philadelphia Eagle because of the startling lack of judgment and moral character he has demonstrated over the past several years. It is questionable whether he will have any credibility as an educator on the dog fighting issue. The ASPCA welcomes a national conversation on animal cruelty and especially dog fighting, but questions Mr. Vick’s ability to lead it. The ASPCA will heighten its efforts to bring this national travesty to the surface through meaningful education and discussion that brings the hard, cold sickening reality of a fight into stark relief for those who might wonder why all the fuss about a dog fight. A true national discussion would focus not on one man and his crimes, but on a nation that allows dog fighting to happen every day without a national outcry. This is where the ASPCA will focus its energies in the coming months.

Mr. Vick has indeed been given another chance to play football with the Philadelphia Eagles. It is important to state that the ASPCA is extremely disappointed that owner Jeff Lurie hired him for his team before it was clear that Mr. Vick has truly developed a sense of compassion for his victims, the animals whose lives were taken by him. The ASPCA believes in second chances — in redemption — but that second chance has to be earned through contrition, conversion to the cause of animal welfare and finally, through hard work. Mr. Vick has only now begun his journey toward a second chance. It will be a long and hard road for him, and while we wish him well, we also want to remind the nation that the work of ridding the nation of dog fighting is as compelling a story as one man’s path to redemption. Let’s not forget to focus on the animals, the crimes that are still being committed every day in the United States. What are we, as a nation, going to do about that? How are we going to express our outrage long past the first time Mr. Vick takes the field in Philadelphia?

Compassion for animals is the hallmark of the ASPCA and the ultimate message that we hope is gleaned from this horrific story. While this case has garnered the national spotlight because of Mr. Vick’s notoriety, it is the end result that will matter most. Will Mr. Vick have learned something — and taken the opportunity he has been granted to impart to his legion of fans the importance of compassion toward animals? Certainly, only time will offer us an answer — but we will be watching.

About the ASPCA®
Founded in 1866, the ASPCA® (The American Society for the Prevention of Cruelty to Animals®) is the first humane organization established in the Americas and serves as the nation’s leading voice for animal welfare. One million supporters strong, the ASPCA’s mission is to provide effective means for the prevention of cruelty to animals throughout the United States. As a 501 [c [3 not-for-profit corporation, the ASPCA is a national leader in the areas of anti-cruelty, community outreach and animal health services. The ASPCA, which is headquartered in New York City, offers a wide range of programs, including a mobile clinic outreach initiative, its own humane law enforcement team, and a groundbreaking veterinary forensics team and mobile animal CSI unit. For more information, please visit www.aspca.org.

This restores my faith in just and reasonable logic. I appreciate that they came forward with this statement.

1,161
Pittee is available for adoption from Tutor Rescue in Tomball, TXPowered by Hackadelic Sliding Notes 1.6.5