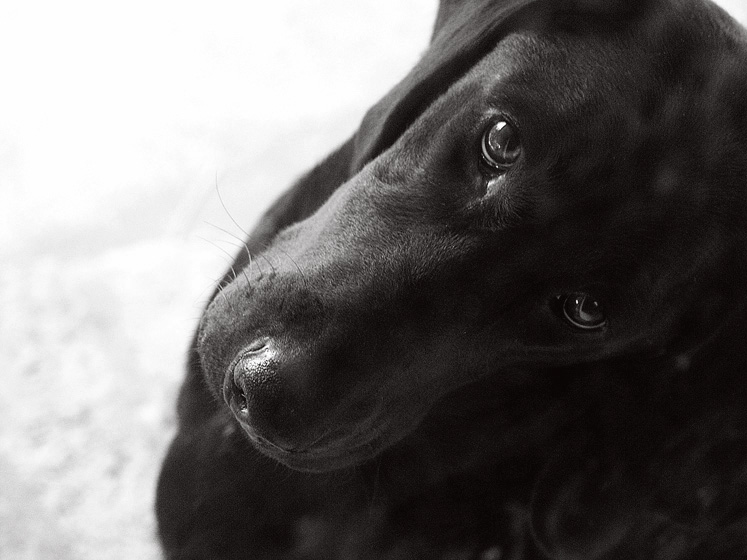 Look at that face. What’s not to love? So imagine when that guy gets lost in the woods… while being deaf!

I have worked with animal communicators several times. There are stories about that here and here. I have friends who have also worked with them. And it has always been an enlightening experience. It was raining when the ac repairman left that unforgettable afternoon in June 2014. Because of the rain, I did not follow him out to check the gate as I usually do whenever anyone leaves. Later on, the rain cleared, the sun came out, and it was a beautiful afternoon.

Near dinnertime, Boogee, my Lab/Basset Hound awoke from his afternoon nap and excitedly wanted to go outside. Nothing unusual there. He is always the one that starts the rather vocal slide into the “kids’” dinner time feeding. He stretches, yawns loudly, jumps off his chaise and heads for the front door. The other dogs and cats start to stir as well. It’s that way every day.

So with Boogee in the fenced-in front yard, I went out back to feed the backyard dogs. After feeding them, I returned to the house to let Boogee back in. Only he wasn’t there.

A frantic search of the yard showed that the gate the repairman left through was ajar. Boogee had left the yard and was nowhere to be seen. My panic went through the roof because Boogee is DEAF. That means that I could not even hope he would hear me call him and return. Further, I live in a densely wooded rural area.

I drove around and looked for him. I hurriedly created LOST DOG signs on scrap cardboard and peppered the immediate neighborhood with them. Within a couple hours, I received a phone call about a sighting. A black dog matching Boogee’s description had been spotted running out of the woods into someone’s yard being chased by a deer. Yes! That would be my Boogee. What other dog would be chased by a deer? But he ran back into the woods with the deer still in pursuit.

That night, I contacted Diane Samsel, an animal communicator I have worked with in the past, to see if she could help me. Over the next three days, we touched base in the morning as she offered her insight into what Boogee was doing and seeing.

One of the first things Diane wrote was: Close by wandering in a garden like space… flowers and mulch. Seems he’s very close to home.

My heart sank because that is not something common to my neck of the woods — flowers and mulch. I mean, we literally live in the woods and people do not generally create flowerbeds. But aside from the hundreds of LOST DOG flyers I posted on street signs and mailboxes, Diane was my best shot. You see, when I looked at a google map of my neighborhood, I realized that the last place Boogee was spotted was next to 100+ acres of woods with no homes within it. A needle in a haystack — that is what I thought.

The next day, I parked near where Boogee had been spotted to walk around. Hopefully I might find him, but at the least he might smell that I had been there. As I was walking towards the wooded area he had emerged from the day before, I saw a freshly mulched flowerbed. It was in the yard he had run into when the deer was chasing him.

My hope soared! This is what Diane had seen! But Boogee was not to be found… that day or even the next.

The next day, Diane wrote: I “see” pine straw and pine trees. It seems his vision isn’t too clear.

There are many pine trees in my neighborhood, so this was spot on. But no Boogee.

Two mornings later, she wrote: He seems to be in the same general place.

Boogee is deaf and people always say that other senses increase to compensate for a lost one. So does that mean his sense of smell would be better? The place he was spotted on the day he disappeared is about 1/4 mile down the street. So I walked down to that area, dragging my feet as I went. I followed the same path home, again dragging my feet.

On my last drive through the neighborhood before starting dinner that afternoon, I spotted Boogee. Nose to the ground, he was following the path I had walked, heading towards home!

Since that time, Boogee has to sleep touching me. I think we both want to know the other is there. I can’t imagine what it must have been like for him to be alone in an unfamiliar place unable to hear anything but silence. And I hope he will never know that feeling again.

My greatest appreciation to Diane for her continued insight. I have to tell you that Diane communicated with me from North Caroline. I live in Texas. She was spot-on in her communications. She kept me going when I was at the end of my wits. And I have Boogee back by my side because of her.

Thank you. From me… and Boogee!