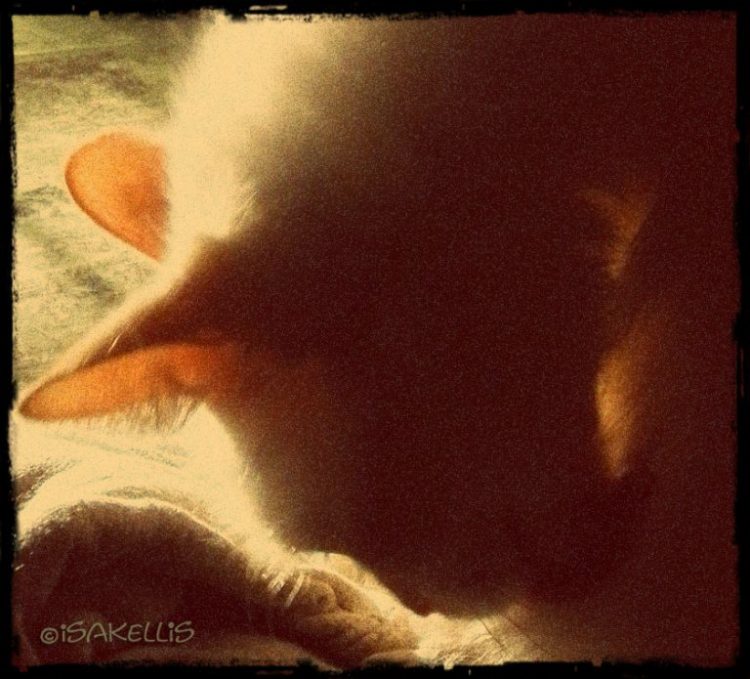 It’s been more than a decade and a half since that late Friday afternoon when a skinny, white kitten walked out of the woods across the street from my house just talking, talking. What exactly he was saying, I am not sure, but he was talking and walking towards me. When he was just a few feet from me, two of my dogs, LeRoy and Lily, rushed the fence. This kitten, not knowing there was a wire fence to hold them back, quickly retreated back  into the woods.

The woods were thick so, fearing I would just scare him further into it, I sat by the side of the road and tried to “meow” back at him. He was vocally quite responsive. After about 20 minutes of back-and-forth “conversation,” he stepped out of the woods and walked to me. I quickly scooped him up and brought him into my house.

He was white with pale orange accents on his ears, nose, head and tail, and beautiful blue ears. Quite the looker with a matching confident personality. Back then, there were not many homes or people out here, so I have no idea where such a young kitten came from. Nor do I know how a white cat survived in the woods alone. He certainly stood out from the colors of the woods.

I named him Gustavus. I can’t remember why anymore, but it became shortened to Goose early on and he became the cat named Goose.

Goose passed away two Sunday mornings ago, October 20. In just a couple days, he stopped eating and grew quickly weaker. He passed away Sunday morning a few hours after I got up. I’m so glad he waited for me and that I was with him when he left on his next journey. In August, another one of my cats, Murphy, did not appear at the late night feeding I do for the outside cats as a way of making them be here, stay inside their fenced yard. They do not much like being inside except on occasion of bad weather. I think that is the case — not wanting to be inside — for cats who spend a lot of time outside. And when I see one of them go racing across the yard at top speed making grand leaps over the pond or wood piles or even other cats, I understand their love of that freedom. But there was no sign of Murphy the next day or the next. I wrote the date on my bathroom mirror as a kind of connection to him. He was just a month older than two years. and quite full of himself. A brave-hearted guy who never recognized danger as anything except a temporary interference to his plans.

At a few months old, he fled up a tree to escape some dogs not yet realizing they were his own dogs. Then he got stuck which was no wonder. He was about 30-35 feet up the tree! Over the next couple hours, I was able to coax him down to about 20 feet at which point he thought that perhaps he could climb out on a tree limb that extended over the house. The branch got quite thin towards the end over the house, but he did not seem to notice. So I quickly moved the ladder from the tree to the house and climbed up on the roof to see what I might do. Frankly, there was nothing I could do, so I abandoned that attempt. Long story short and a couple hours later, he made it to a branch close to the trunk that I could finally reach from the top of the ladder where I snagged him and brought him back to earth!

That’s pretty much how Murphy lived his life… one adventure after another. I last saw Murphy at dinner on August 25, 2019. It’s been over 1330 days since I last saw Angel Pie, a feral cat who came to be a distant part of the family. She lived in the back of my property. I built a small shed for her and also placed a cat igloo out for her. She was there for breakfast and dinner every day… until she became ill and died. The vet thinks she may have eaten something that was poisonous. By the time she died, she was blind and possibly deaf from whatever was ravaging her body. She died here at my house as I was finally able to catch her and take her to the vet, but it was too late.

A few days after she died, I quit smoking and, as a way to mark my progress, I wrote how many days it had been on my bathroom mirror: 1, 2, 3, etc. Eventually, I changed the number only on Sundays. As the number got bigger, it became a good reason to not smoke as I would have to start the count over again. But also over time, it became a link back to Angel. It came to represent how long it has been since I last saw her. The count right now is 1333. That means it’s been over 1333 days since I lost my little Angel Pie; 190 weeks or over 3 1/2 years.

I’m thinking it’s time to wipe the mirror clean. Erase these numbers. Plug those holes in my heart. But in some unexplainable way, these numbers are like strings that connect me to them. And it’s that letting go that is so really, really hard to do.

My life has been full of wonderful cats and dogs. You can see some of them here.