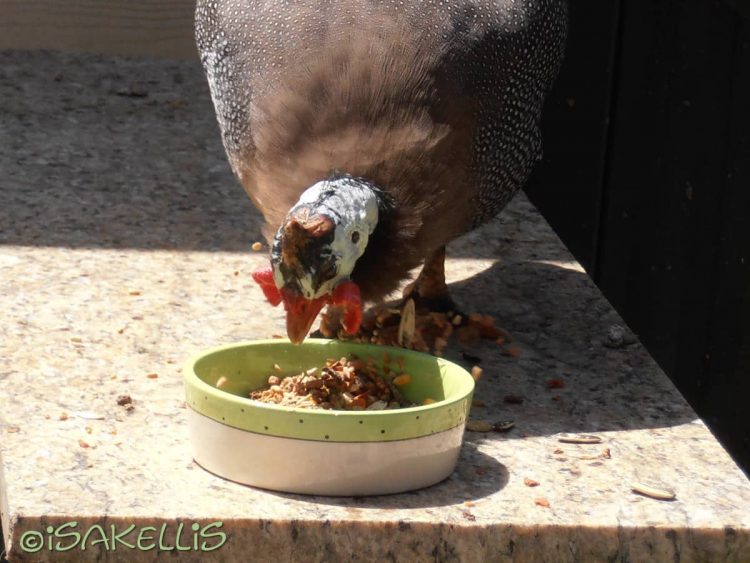 Just by virtue of living in the country, pet-sitting is a fluid responsibility. You might show up to find a new cat lurking along the periphery of the yard looking for a meal. Or maybe the neighborhood possum has arrived with her new babies on her back. Sadly, sometimes you find yourself with LESS characters than before because someone has fallen prey to something out there that you do not see. A coyote? Bobcat? Hawk? Or even a snake? I pet sit for friends and their story is no different. Over the years, the cat group has changed. None of the original group is there anymore. On a visit a couple months ago, I was greeted by a flock of guinea fowl. Knowing next to nothing about them, we guessed there were two girls and two boys based on their coloring and feather patterns. Seems they just showed up. None of the neighbors knew where they came from either.

Over the coming weeks, the number sadly dwindled to one. One lonely guinea. And he did seem lonely. As no one seemed to be doing so, I named him. Jim Guinea. Kinda in the spirit of the Black Oak Arkansas song, Jim Dandy. Remember the song? As a single guy, he has become a companion to the two outside cats, Chou Chou and Rusty. I pulled in a couple weeks ago and there the three of them were hanging out together in the driveway. The two cats were laying on the edges of the driveway watching Jim Guinea peck at possible bugs in the gravel. Sometimes you can catch the cats playing with Jim, too. A short, but gentle game of tag. Jim has a couple of favorite perches. One is on top of a table that’s outside a window on the back deck. I’m not sure if he can see into the house or if he is looking at his reflection. After dark, he perches on the railing of the outside stairs that go to the second story porch. There is a landing about two-thirds of the way up that’s well lit. I think it — and his cat companions — affords him more safety than he and his flock had.

So here’s to Jim Guinea. Welcome to the ‘hood!