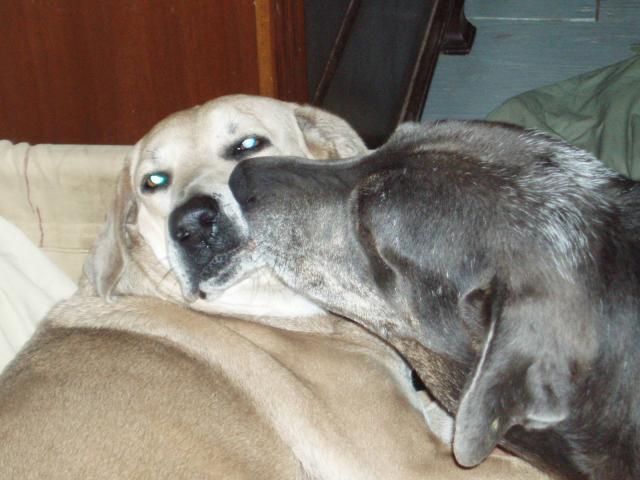 by Tina Clark
[Note: For more information on the no-kill movement, visit nokilladvocacycenter.org or nokillnow.com.]

There is much discussion these days about the killing of animals in “shelters.” On one side of the issue are those who argue that killing is a “necessary evil” which will always be with us. To these people, the concept of no-kill is a “pipe dream” adhered to only by the naive and hopelessly idealistic. There are “too many animals,” they say, and “not enough homes” for all of them, and therefore, we must kill them.

Proponents of no-kill, on the other hand, claim that ending the killing is a possibility. If we institute and assiduously follow a number of programs such as low-cost spay and neuter, more aggressive adoptions, and so on, we can bring about a time when we no longer have to kill animals. It is only these programs and changes, they say, that will allow us to stop the killing.

I suggest that there is a problem that goes much deeper than this debate.

The problem is that we are asking if not killing homeless animals is possible, rather than taking it as a given that not killing them is mandatory and taking it from there.

The problem is that our society places such a low value on the lives of non-human animals that we would even consider that execution as a solution to homelessness would be an option.

The problem lies in the very fact that there even has to be a no-kill “movement.” Unfortunately, this is something that even many proponents of no-kill tend to lose sight of, or perhaps don’t even believe to begin with. They seem to feel the need to defend no-kill on the basis of its feasibility, not its inherent rightness. Yes, they say, it can be done, but of course it can’t happen overnight. We must first bring about all the right conditions, and then we can “achieve” no-kill. But the truth is we can stop the killing now. Not only that, but we must. It is a moral obligation.

To many, even of those who truly believe in the “ideal” of no-kill, this idea seems radical. This is in itself a sad indication of how far we are from a proper attitude toward non-humans.

Consider this: We have a major homeless human problem in this country. But in all our discussions of ways to deal with this problem, would we ever, in our wildest dreams, consider for a moment killing homeless humans to solve the problem? If an orphanage or homeless shelter reached its capacity and new individuals came in, would we kill those already there to make room? Of course not. It simply isn’t an option. It is totally unacceptable. So why do we consider it acceptable to kill homeless non-humans? The answer is simply speciesism. The truth is, we don’t do very well by our homeless human population. But at least we haven’t stooped to killing them as a means of “population control.” We still have the decency as a society not to kill a human simply for being homeless. We should also have the decency not to kill a non-human simply for being homeless. As it is, we have it backwards: we advocate instituting new programs, etc., that will “allow” us to stop killing, when we must first stop the killing, then we will be forced to do whatever it takes to deal with the situation in ways that do not involve killing individuals simply because they don’t have a home. And that means we would have to really get serious and come up with some truly innovative programs, because we would have no option — we could no longer just make the problem go away by murdering the “surplus.” And we would have ameliorated to some extent an underlying sickness that pervades our society — the notion that if the problem involves non-humans, one potential option is always simply to kill them.

Even if we do “achieve” an end to the killing because we have implemented programs that make it no longer “necessary” to kill animals, we have missed the point. Until we change our basic attitude toward animals — until we wake up and realize that non-human life is also precious — the real problem will not be solved. And until this happens, any other solutions will be merely a band-aid, and the use of murder as a solution will be lying just under the surface, ready to bubble up at any time, it if is perceived that there is once again a “problem.”

We must stop the killing, not at some future date because we finally have enough homes, or finally have a “manageable” population, but now, simply because it is unacceptable to kill them, whether they have a home or not. We must stop talking of “alternatives” to killing, and realize that the only acceptable alternative to killing is not killing. Then the progress will come of necessity.

And indeed, this notion that killing is an acceptable option is in itself, I propose, in great part responsible for the homeless problem. Is it any wonder that so many people treat animals as throw-away commodities when they see the very system that is supposed to take care of and protect these animals treating them like so much trash?

But until society wakes up (and one day it will, as it has with other societal atrocities), we must work within the system and for that, the no-kill movement is the closest thing we have to sanity. And blessings on all those who are working and striving for an end to the killing. But we must realize and continually keep in mind the real underlying problem, a problem that is not going to be solved by spay/neuter programs, aggressive adoption campaigns, or any other logistical activities, but only by a complete change in consciousness and world view. Let us hope that change occurs before too many more innocent animals have to die.
. . . . . . . . . . . . . . . . . . . . . . . .
reprinted from The Poppy Foundation